“We want more. We want to see even more bright ideas, turn into successful businesses. We want Odense to become the world’s leading city for robotics. We want ‘Made in Odense’, to be a hallmark of quality and innovation”,

So were the words from Peter Rahbæk Juel, Mayor of Odense, when he, alongside robotics entrepreneur Esben Østergaard, opened R-22 this morning thus officially inaugurating the biggest robotics fair in the Nordics.

During the next three days, Odense Congress Center will be the place to be in terms of robotics, when more than 100 exhibitors welcome several thousand guests.

Four world premieres
In addition to a keynote speech from Esben Østergaard about the new frontiers for robotics, the first day of R-22 showcased four world premieres in the shape of new product launches from OnRobot, Effimat, Roeq and Intelligent Systems respectively.

Similarly, the conference program offered topics such as ’Cobots for Process Applications’, ‘Successful product development via innovation collaborations’, ’Robots for municipalities’ and ’Robots as a tool’.

Many visitors
At Odense Congress Center, which hosts R-22, the high number of visitors has not gone unnoticed.

“It has been a pleasure to walk around the fair and feel the positive vibrations. Already during the first half hour, we welcomed a lot of visitors. The exhibitors have experienced many visitors at the stalls, and the conference turnout has been really good. We therefore look forward to welcoming many more visitors Thursday and Friday,” says Katarina Fruerlund Deylami, Business Unit Manager at Odense Congress Center. 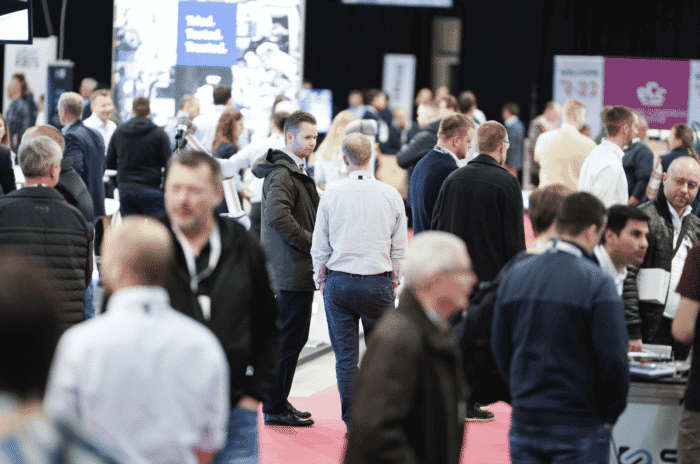